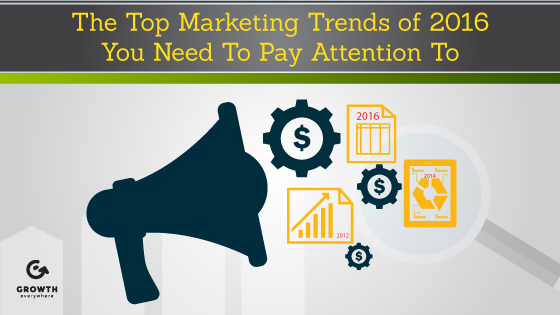 I thought it would be a good idea to use Google Trends to take a look at what’s happening in the marketing space. In 2016, there’s a lot of chatter about:

Wherever attention goes, marketers go; so it’s important to understand how things are trending over time. First, let’s take a look at the big platforms:

People have been preaching that ‘SEO is dead’ for years and yet we see that it continues to hold strong even to today. As long as there is search, there will be SEO. Whether that’s voice search for e-commerce or search in its current state, it doesn’t matter. Search is search.

PPC has taken quite a dip starting in 2008 and I have to assume part of the reason is because it’s more of a discovery term that leads people into finding out about advertising platforms such as Google AdWords. Nowadays, a large chunk of companies trying to grow their business online are using PPC and it isn’t such a new term anymore.

SEO is different because it has gotten harder and harder through the years and tactics have had to shift. Many agencies/practitioners have had to shift their ways or shut down their businesses. This explains why the interest is so high in SEO: because it’s still convoluted to many people.

Starting in 2013, content marketing really started to see a lift and it continues to grow even to this day. E-mail marketing has been around for a long time and has more or less stabilized. Don’t count e-mail marketing out though, because every $1 spent results in $44 returned.

Snapchat is has become a social media force with over 10 billion daily video views. With over 100 million daily users and a $16 billion dollar valuation, it’s worth taking a look at if you haven’t invested effort yet. Think of this as early days Facebook or Twitter where it’s the best time to start building your audience.

Prominent entrepreneur and author Gary Vaynerchuk allocates a significant portion of his time to the platform. Twitch co-founder and YC partner Justin Kan has a very engaging snapchat. Upfront Ventures’ Mark Suster posts daily bits of business wisdom to his Snapchat and reposts them online later.

Instagram now has over 400 million users and continues to grow at a strong pace while it seems Pinterest has more or less stabilized.

On the flip side, Twitter has been in a downward spiral for the last few years. Its stock price has been getting demolished due to stagnant user growth and a product that needs significant improvements.

Voice Search will continue to grow over time and it’s already starting to gain steam. Google has hinted that its already planning to add Voice Search reporting to Google Search Console, which is its free SEO tool. Thrive Analytics reports that 56% of adults now use a form of Voice Search. Which is up 30% over the last 12 months.

Take a look at the numbers below on people using digital personal assistants): 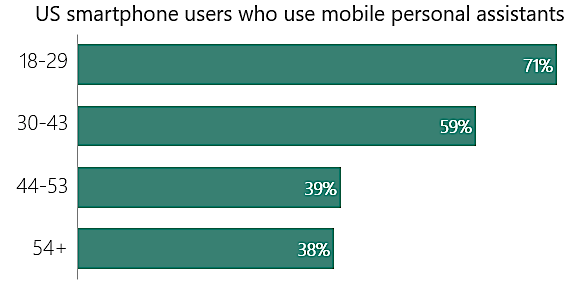 Here’s a graph from Northstar’s Mobile Voice study on what people actually use voice search for:

As artificial intelligence continues to get better, these assistants will only improve and make our lives easier.

And it makes total sense. With the rise of ad blockers and people just being plain resistant to clicking on ads, it makes sense to turn to influencers to help market your products or services.

Referrals are one of the strongest ways to get others to buy – this is a fundamental concept that has never changed. Look into the influencers that might be the ideal fit to promote your offering and you might just find the next successful growth channel for your business.

Just how much do people HATE ads? A lot.

On average, 9.26% of impressions were found to be ad-blocked and active Ad Blocker users have reached 150M browsers in the United States. 26% of internet users say they use an Ad Blocker. AdBlock Plus reports that they have over 100 million active users.

I used to use ad blockers about 7 years ago before I started to learn digital marketing. Since then, I’ve had to leave them on to do my work. Frankly, I’m surprised that the growth hasn’t been faster because I LOVED my ad blocking tools back in the day.

So what are publishers to do about the rise of ad blocking? How will they make money?

Native advertising is a type of advertising, usually online but feasibly elsewhere, that matches the form and function of the platform upon which it appears.

An example of native advertising would be advertorials that you might see on sites such as Buzzstream or The Atlantic that have a specific call-to-action. Similarly, ‘sponsored content’ is the same idea but typically lacks a call-to-action.

We can see that bots are slowly beginning to have an uptick in this graph.  With Kik, Telegram, Facebook Messenger, Microsoft, Slack and other companies pooling significant resources into bot creation, it’s worth at least taking a look at bots to see what the true implications are for business.

To me, the implications are huge:

The best part about it all? We’re just barely scratching the surface.

You can hear conversations around you and hear a ‘swish’ in the distance and whistles blowing. It’s almost as if you’re there. 70% of all the sensory receptors in the body are in the eyes – it’s our primary sense.

Now imagine teleporting to Bali to explore a hotel that you want to go to. Or teleporting to a furniture store 5,478 miles away to see what you’d like to pick up. Or just playing your favorite game with your friends?

Virtual reality is on the uptick and while I think it’s still a few more years from hitting mainstream, it’ll get there and when it does it’s going to change the world.

Crowdfunding is the practice of funding a project or venture by raising many small amounts of money from a large number of people, typically via the Internet. A good example of this would be Kickstarter.

This is good for marketers to pay attention to because it’s becoming more and more popular to fund a project through Kickstarter first and then move into raising a Series A round to give a company the fuel it needs to grow.

More and more startup companies are looking for individuals or agencies to help them with their Kickstarter campaigns (sometimes in exchange for equity).

Fitbit seems to be on the upward trend as health awareness continues to be a growing trend amongst consumers. The Apple Watch had a nice PR bump when it released but seems like it is more or less stabilizing. Jawbone has remained the same for a few years.

The wearable technology today is cool – sure. But has it reached its potential? Definitely not. I think we’re still 5-10 years off from having more frictionless wearable technology that will track our food intake without having to manually input data. Even more compelling? Wearable tech that will warn of health problems before they occur.

In 2016, the eSports Economy will grow to $463 million, which is 43% YoY growth. eSports is widely accepted in other countries and is becoming more popular in the United States. So popular, in fact, that ESPN will be dedicating resources to covering eSports. Newzoo reports that revenue growth will jump to over $1B by 2019, which is a 40.7% CAGR (compounded annual growth rate). 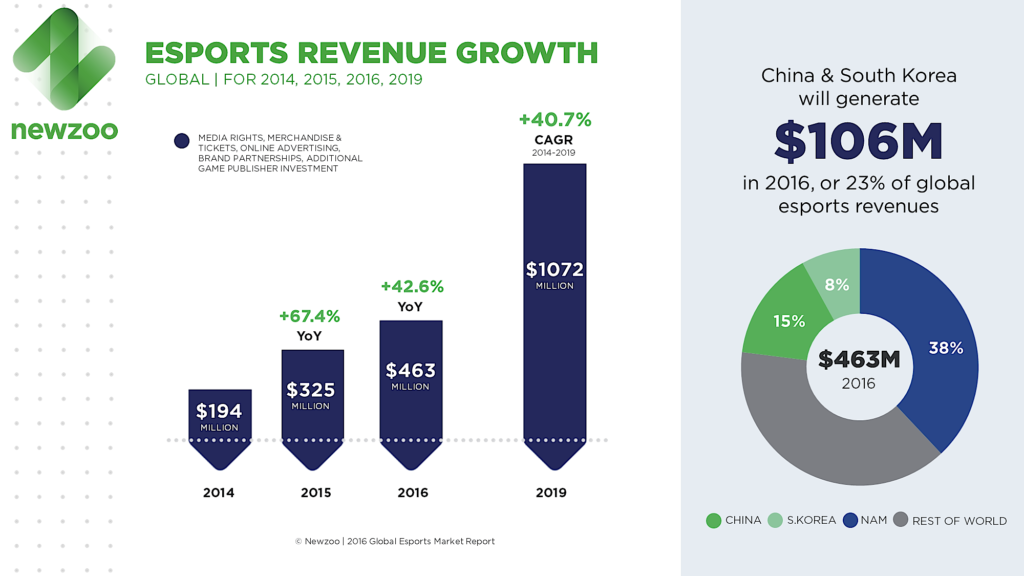 Being a former competitive gamer myself, it’s exciting to see how this industry is evolving to look like real sports. Seeing team owners, managers and TV coverage shows just how serious people are about gaming.

Entrepreneur and author Gary Vaynerchuk says that he likes to ‘day trade attention’, which basically means he’ll get in on platforms that he sees a lot of potential in (buying low) so he can achieve massive returns when they grow to massive scale.

Remember this: Marketers will flock to wherever the attention is and eventually pollute the ecosystem. That’s how it has always been and how it will continue to be.

Take a look at your business model and think about where it might make sense to start marketing in the future. If you spot a trend before others do, you’ll be able to get in cheap and capitalize for a couple of years before it becomes too expensive to play the game. Case in point: Gary Vaynerchuk was able to buy the keyword ‘wine’ for $.05 a click when Google AdWords became available.

Apply that concept to your business; if you can strike early and often, you’ll have a major advantage.

How We Instantly Raised Average Order Value by 10% 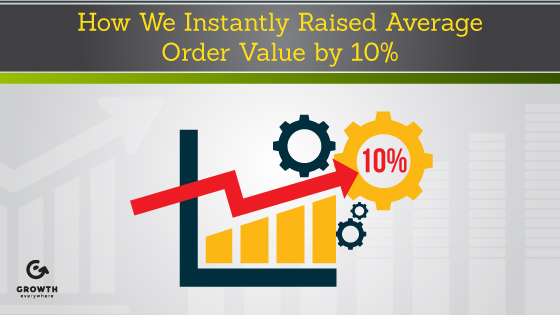 GB Ep 25: How to Impress Your Clients

GE 95: How Wet Shave Club Leveraged Instagram to Get To $350K In Revenues

GB Ep 93: How to Find Emails Quickly Using This Tool