Firing is never a comfortable situation.

Here’s why it sucks:

My hesitations with firing in the past have always been centered around ‘protecting the employee’. I asked myself what would happen to their family? How would they survive? How can I hang them out to dry like that? All logical questions and while it’s a valiant mindset, it’s wrong. My first job is to protect the company first before anything else. If someone is hurting the company more than they’re helping it, it should be time to go, no questions asked.

I’ve gotten better at it over the years and I’ve put processes in place to help me avoid some of the firing blunders I’ve made.

I used to think ‘hire slow, fire fast’ was a joke.

I’m sharing two personal stories below so you don’t repeat the same mistakes that I made.

Perhaps one of the most toxic situations I was in was when I left for Europe on business for two weeks. About two months earlier, I decided to pull the trigger on hiring a senior level employee that had a lot of experience in an area where we really needed help in. This person came as a referral from someone I trusted and the references checked out. Lots of experience ranging to working from Fortune 500 brands to impressive startups as a contractor. Let’s call this person Bob. Although there were some signs of problems during our trial period (where we give candidates a project to work on to assess their abilities), I decided to move forward with the job offer.

Bob frequently touted his past accomplishments in front of employees and took credit for other peoples’ work. Not only that, Bob was a gossiper and would go behind peoples’ back to talk trash about others. He would continually talk about offers he’d be getting from Google and other big companies and ultimately started putting down the company whenever he had a chance to. Meanwhile, Bob would continually put on a facade in front of me indicating that everything was great.

During my Europe trip, an employee called me to let me know that he was resigning and told me just how toxic the situation was. He informed me that Bob would hold meetings just to bitch about how things aren’t getting done, how a big company would never behave like this, and how some people are ‘too junior’. No solutions provided; just complaining.

Despite everything I heard, I was still hesitant to fire Bob because I kept looking at his past credentials and thought he’d be able to turn it around after having a heart to heart with him.

Here’s what I learned:

Mistake #1: You think you can get them to turn it around

Of all my experiences in the past, no one has been able to turn it around after being given warnings. If it’s clear that this person is destroying your company from the inside-out, you need to cut ties immediately.

Mistake #2: You have too much pride to let them go

This was a big bet for the company and the hiring decision was ultimately mine despite one employee voicing his concerns about Bob’s attitude before we made the hire. Even though you made the hiring mistake, it’s MORE of a mistake to keep holding on to them. Accept your mistake and move on. Don’t let your mistake build upon itself and rip an even deeper hole into your company.

Story 2: No longer the right person

There will be times where people that were previously great are just no longer a fit for your company. For example, after Netflix’s IPO, they had to make significant changes such as letting go previous A-players that were no longer a fit (https://hbr.org/2014/01/how-netflix-reinvented-hr):

“The second conversation took place in 2002, a few months after our IPO. Laura, our bookkeeper, was bright, hardworking, and creative. She’d been very important to our early growth, having devised a system for accurately tracking movie rentals so that we could pay the correct royalties. But now, as a public company, we needed CPAs and other fully credentialed, deeply experienced accounting professionals—and Laura had only an associate’s degree from a community college. Despite her work ethic, her track record, and the fact that we all really liked her, her skills were no longer adequate. Some of us talked about jury-rigging a new role for her, but we decided that wouldn’t be right.

So I sat down with Laura and explained the situation—and said that in light of her spectacular service, we would give her a spectacular severance package. I’d braced myself for tears or histrionics, but Laura reacted well: She was sad to be leaving but recognized that the generous severance would let her regroup, retrain, and find a new career path. This incident helped us create the other vital element of our talent management philosophy: If we wanted only “A” players on our team, we had to be willing to let go of people whose skills no longer fit, no matter how valuable their contributions had once been. Out of fairness to such people—and, frankly, to help us overcome our discomfort with discharging them—we learned to offer rich severance packages.”

A similar scenario played out at my company where one guy, who we’ll call Jack, was a asset from the beginning. He would wake up early in the morning, continue to learn, and do what it takes to make things happen. Despite Jack excelling in his role, we had to restructure and make some changes. Jack’s role was no longer needed but I still wanted to keep him because I thought he could be put into a different role. I actually made this mistake twice as he was given two different roles afterwards and even though he did an ‘okay’ job, he was just not as productive as before.

Mistake #3: Good employee but no longer a fit for your company

On top of that, Jack had an ego problem and ran into confrontations with employees, clients and other entrepreneur friends of mine. The correct move would have been to thank Jack for his services and give him a severance package. The mistake was letting him linger. It’s better to hire someone that is a.) already has experience and b.) is interested in the role itself. Jack eventually found another job and noted in his exit interview that he wasn’t interested in the last role that was given to him and only kept the job to pay the bills for his family.

Really ugly mistake. Please don’t make the same mistake that I made.

Firing is a necessary evil if you want to keep moving your company in the right direction. Even if you have the best hiring processes in the world, you’re going to make mistakes every now and then. The best thing you can do is to make decisions swiftly and continue to revise your hiring processes each quarter.

GB Ep 49: How to Create Effective Landing Pages in Minutes

Forced Hiring: An Amazingly Effective Way To Find The Best Hires in 2016 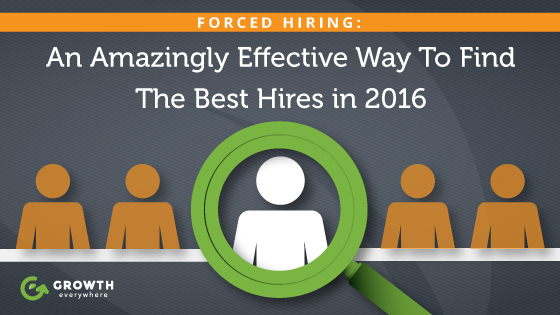